One of the topics addressed during the talk was the impact that technological advances will have on our ways of living, learning and working in the years to come.

On the occasion of its 20th Anniversary celebrations, on 1 December, IED Barcelona organised the round table "What's the next point?" in a bid to imagine what future design scenarios will be like from the perspective of training, taking the city of Barcelona as a case study.

After a few words from Agustí Valls i Prats, General Director of IED S.L., and Emanuele Manzitti, Hon. Consul General of Italy in Barcelona, ​​the debate began. Firstly, the speakers analysed the state of design in the city. All agreed that it has not lost its appeal as a centre of reference for creative talent.

Riccardo Balbo: “A few years ago, Barcelona was the city where you could do whatever you wanted, the American dream of creativity. And that remains intact, because its will to be free is something that other cities do not have.”

They also highlighted the key role of design in achieving the SDGs of the 2030 Agenda. In fashion, for example, there is an increasing commitment to projects that work with upcycling, small brands and the local level.

Pilar Pasamontes: “The fashion sector is realising that the world has changed. We have to be sustainable because we have no other choice. And young people know it: they are carrying out different projects, creating small brands, local fashion for people who don't want to be like the rest.”

Another of the topics addressed during the talk was the impact that technological advances will have on our ways of living, learning and working in the years to come. Although the experts underlined the difficulty of trying to imagine the future, they indicated that in the field of visual communication, transparency and simplicity will be enhanced to facilitate the understanding of messages.

Sisón Pujol: “The speed of technological innovation is such that it is not possible to predict how we will communicate in the times ahead. Everything is changing at a tremendous speed. But what I would dare to say is that communication will tend towards greater transparency and simplicity, in all areas. And this will mean we understand messages much more quickly.”

Regarding how all these changes are already affecting the training of designers, they underlined the importance of recovering a humanistic culture. In their opinion, without this knowledge that acts as the foundation of education, new generations will present worrying learning gaps.

The symposium concluded with a reflection on how much remains to be done in the field of design to ensure it is more fair, balanced and sustainable.

Bern Donadeu: “The responsibility we have in terms of sustainability (how we make products, consume them and the image that designers present to the world) has changed a lot and is changing, but there is still a long way to go.”

Although big brands, for example, have already made advances that were unthinkable years ago, the next few decades will reveal whether together, we have indeed succeeded. 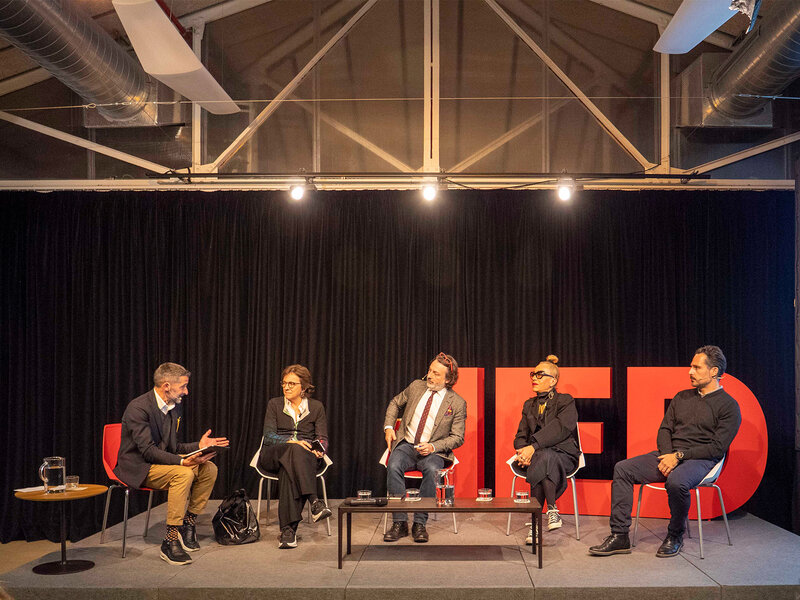 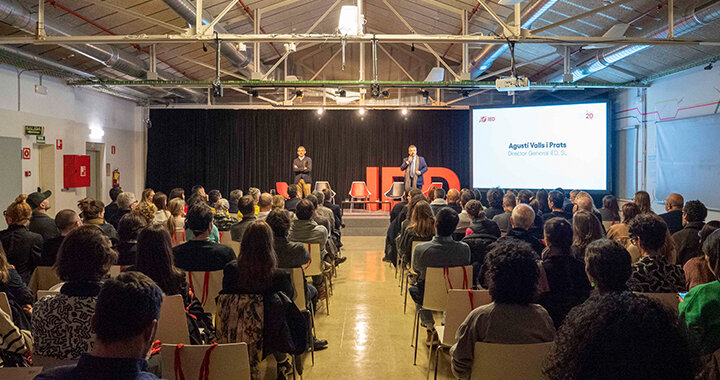 The international digital promotion platform INSPIRED IN BARCELONA has highlighted the creativity of two projects that rethink the future of food waste in its Inspired Picks section.

Its objective is to promote local commerce in the city thanks to the transformative power of design.

On the occasion of this celebration, “A collective dream” will be showcased; a display through the history of the school by way of outstanding projects carried out by its students.

The Ex•Tĕrra project by IED Barcelona student Carolina Galeazzi has won one of the Foodture Sustainable Innovation Awards.

A very special start, with the date of 19 September marking 20 years since we opened our first centre in the city.

'Designing for the Many: Hemeroteca Digital'

A pioneering venture funded by the EU program ‘Horizon 2020’

What are the consumption needs subliminally transmitted to us by horror films? How is a country’s branding constructed? How has interpersonal communication changed with the advent of new technologies and social media?

The path of the creative process

A master class, organised in collaboration with Cultura Inquieta and Renault, around the different phases of creative production.

‘Suspended in transition’ is the theme proposed for this year’s edition; a motto that encourages designers to embrace uncertainty as an arena from which to reflect, to step out of their comfort zones, and to explore alternative futures.

The school is present at the event with a textile flower workshop that highlights the value of sustainable fashion through the use of repurposed haute-couture fabrics.

A journey across world literature through the redesign of book covers

“Books are the plane, and the train, and the road. They are the destination, and the journey. They are home".

How do we construct and explain stories? How do we use technology to improve new realities and formats? How do physical space and the virtual environment coexist? What aspects define good design in virtual worlds?

Italian Design Day 2022 - Inspired by the legacy of Enzo Mari

The 2022 edition is being held under the theme ‘Re-Generation, Design and new technologies for a sustainable future’.

IED Barcelona will be part of the Saló de l’Ensenyament from 16 March to 20 March.

Climate action focus of the latest edition of CBI

“From a small farmer in the Philippines to a businessman in London, climate change is affecting everyone”.

The Herstory of Design

Women have written key chapters in the history of art and design, not always receiving the public recognition that their contributions to these disciplines have deserved.

This conference brings together the directors of European schools and universities in the fields of business marketing and economics.

‘Treequency’ gives a voice to the trees at Llum BCN 2022

The installation has succeeded in recreating an oasis of calm and a connection with nature in Poblenou’s Parc del Centre.

Parametric design, or how to push the boundaries in the fashion industry

The summit will take place on 26 and 27 November at the Disseny Hub, which will feature three projects by IED Barcelona alumni.

Italian Design: The bridge between beauty, technology and humanity

How design inspired by Italian culture can help restart Europe in the next decade?

Connecting with the mind and body through light

‘478’ is the installation with which IED Barcelona was present in the special edition of Llum Barcelona.

Innovative, sustainable and committed design to help refugees in Lesbos

‘Join it’, a system of sustainable production by IED Barcelona Product Design students has won the 4th edition of the Social Ideas Contest for the Greek island of Lesbos.

‘Flink’ responds to the challenge to design an innovative proposal for the kitchen sink and tap space, including new features, all within a period of eight hours.

From new crafts to virtual identities

An interactive installation to create our own virtual identity and an immersive journey through a 3D “wonderland” are the proposals that IED Barcelona and IED Milan presented at the SónarCCCB 2021, driven by Sónar.

'Castellers' is a proposal inspired by the colours and shapes of the long-standing Catalan tradition of the 'castells', or human towers.

'Experiential vehicles, the tourism of the future', by IED Barcelona, SEAT and Carnet

All these designs result in THE GREATEST TRIP for a reduced group of passengers. They go beyond mere functionality, enabling people to form connections on the basis of experiences.

A collection of clay pavement tiles that serve as a street filter system.

The project is one of the designs selected by a jury of 43 international experts in the first round of this prestigious competition.

Cross Cultural Chair is a project that blends anthropology with design and draws on the importance of seating and ways of sitting according to different cultures.

Stations of a near future: Experience within a Hyperloop station

A project focused on the current needs of cities and their citizens, the integration of technology and respect for the environment.

IED presented the MixCities and 2020+20 projects at the extraordinary edition of Sónar+D, which took place on September 18th and 19th at the CCCB.

The proposal, selected from 93 national projects, addresses the impact of current mobility restrictions on student travel.

IED Barcelona has been involved in the new headquarters of the Italian Consulate in Barcelona, with a graphic proposal.

Reconnecting with nature through biophilic design

Lluman: Light and nature to bring Poblenou to life

The project evokes the evolutive process of the natural world, focusing on the irregularity of the biophilic and organic patterns.

IED Barcelona Alumni Federico Abascal led the team of the exterior design of Turian, the Hyperloop UPV prototype designed for the Pod Competition 2019 organised by Space X and The Boring Company.

IED participates in Dubai Design Week 2018 with Stalactite, a project by Master in Sustainable Design from IED Barcelona, and also offers a workshop in collaborative design.

IED Barcelona and Seat design the future of mobility

The initial approach was to design innovative transportation systems for 2035.